About Joure - Activities in Joure

Day out in Friesland? Go to Joure! 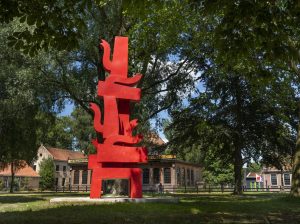 Joure 'a vlecke' with a rich history 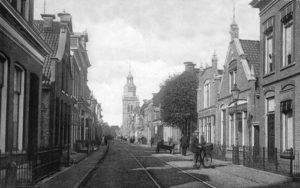 Joure is located in the southwest corner of Friesland (officially Fryslân) and is the capital of the municipality of De Fryske Marren (the Frisian Lakes). Joure has about 13.000 inhabitants and is the sixth place of Friesland. For the history of the village we go back to the 15th century.

Joure (in Frisian De Jouwer) was founded in the 15th century next to the former village of Westermeer. It was considered a relatively safe place for the notorious Norsemen. Because although Joure was situated at a crossroads of waterways and therefore easily accessible, it was also remote. This offered some protection against plundering Scandinavians.

Joure is traditionally called a 'vlecke', a settlement with urban characteristics but officially not a city. Although Joure was not granted city rights, it was an important village around the 16th century. Joure, for example, had the right to a weekly market. In those days a privilege that not many villages enjoyed. Later there was also an annual fair: the Jouster Merke. Due to the growth of the spot, the older, neighbouring mother village Westermeer merged into Joure. At the cemetery in the centre, the only physical reminder of this ancient village is a medieval church tower.

How did Joure get her name? There are several theories about this. Joure's Frisian name 'De Jouwer' is reminiscent of the Frisian word 'Hjouwer', which means oats. Joure is said to be located on a field where oats used to be grown. Another possibility is the Germanic word for water: 'ghebhara'. This explanation seems likely because both Joure itself and its surroundings are rich in water. Histoarysk Wurkferbân Skarsterlân knows more about it.

Did you know about this?
In Friesland, most towns and villages have a Frisian as well as a Dutch name. These can be very different from each other. In Frisian Joure is called 'De Jouwer'. 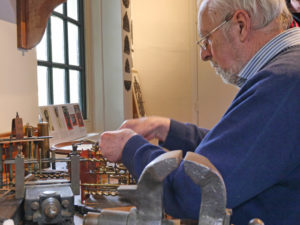 Joure has always known many clockmakers.

Jousters practice(d) many different crafts. The centuries-old history of these crafts can still be experienced in Joure. Most eye-catching are the shipbuilding, Frisian clock industry and of course the coffee roasting of D.E. Joure's largest industries attracted other crafts. Furniture makers, for example, where the clock cases were made. And braziers who took care of parts of the clocks. Trade used to take place mostly over water. The village therefore had several shipyards for the Frisian skûtsjes and windows that were used. 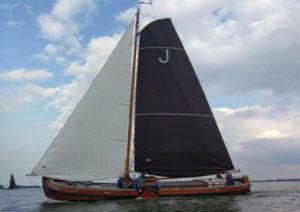 Windows are one of the oldest types of ships. These long, narrow boats have a flat bottom and were ideal for transporting merchandise, such as peat, through the inland waterways of Joure. Skûtsjes are Frisian sailing ships with a length of 12 to 20 meters. The skûtsjes were used as cargo ships, until motorized ships took over their role. Today, the ships shine during the annual Skûtsjesilen, in which Joure also participates. On the picture you see the famous Jouster Skûtsje. One of the most beautiful and fastest skûts of the SKS.

Traditional Frisian clocks have been made in Friesland since the 18th century. Although bells were also made in other parts of the Netherlands, especially the Frisian bells have become known. Joure was the center of that clock industry. Clockmakers made many Frisian stool clocks and tail clocks. But what's the difference?

A Frisian chair clock is a hanging clock that stands with legs on a chair or wooden wall shelf. These clocks were made from the 18th century onwards. When the tailgate clock came on the rise, stool clocks became more and more elegantly decorated. Typical are the painted dials and the gilt lead decorations. 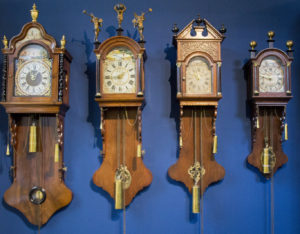 Frisian miniature tail clock, or an office or notary clock.

The Frisian tail clock was made from the second half of the 18th century. This clock is derived from the chair case, but hangs on the wall and has a long case with the crank in it. In the closet there is a window through which you can see the pendulum. Also this clock is nicely decorated. The Frisian tail clock has a beautifully painted dial and decoration of lead or copper. The clock strikes every hour and a half.

Did you know about this?
In Joure, Frisian clocks are still made, repaired and restored according to traditional methods. Museum Joure houses the world's largest collection of Frisian clocks.

Of course you know Douwe Egberts from D.E coffee, Pickwick tea and maybe you've been in a D.E Café. It is hard to imagine that these world famous brands have their cradle in Joure. Still, it is. And you can tell that from everything in Joure.

Did you know about this?
The Douwe Egberts company has its origins in Joure. Egbert Douwes started a shop in Joure with colonial goods. Later this shop was taken over by son Douwe Egberts and became the famous brand of coffee and tea. The original shop on the Midstraat in Joure still exists. 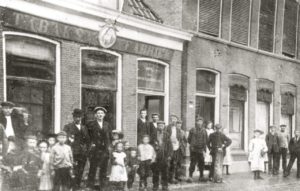 Employees of (probably) Douwe Egberts for D.E premises in the Midstraat. Now part of Museum Joure.

The history of the famous coffee brand goes back to 1753. Egbert Douwes and his wife started a grocery store called 'De Witte Os', on the Midstraat. Here they sold groceries such as coffee, tea, tobacco and chocolate. The company was later taken over by Douwes' son, Douwe Egberts, who also became the company's name giver. From now on, the Jouster company focused mainly on coffee, tea and tobacco. In the centuries that followed, D.E. has grown from a small shop into a world-class player. Nowadays the parent company is called Jacobs Douwe Egberts (JDE).

Among other things, JDE has the following well-known trademarks:

Although the head office moved to Utrecht, there is still a large D.E. factory in Joure. There are many Jousters who have a past at Douwe Egberts or still work there. The company has undeniably been important for the development of the village. It's not for nothing that many Jousters are proud of 'their' coffee and tea.

What to do in the centre of Joure 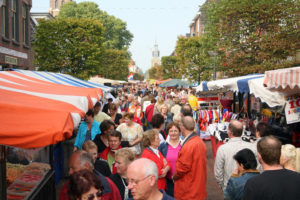 Conviviality at the annual Jouster Merke.

Day out in Friesland? In the centre of Joure, you can enjoy a whole day with ease. The range of shops is extensive and there is a lot to do in terms of culture. In addition, Joure has various sights and especially in summer there are many activities and events.

Parking in the centre of Joure

In many places you can see the history of this craft village. Thus, in the centre - on the Douwe Egbertsplein - there is still a Jouster clock making workshop. And in the Midstraat you'll find 'De Witte Os', the very first Douwe Egberts store and now part of Museum Joure. The museum still sells traditional roasted coffee and loose tea. 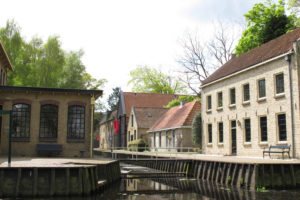 Experience a wealth of crafts

Through the shop you walk into an attractive coffee and teahouse, located in the stately home of the 'second founder' of Douwe Egberts: Cornelis Johannes de Jong. A visit to the adjacent first D.E-factory, the D.E-collection and the birthplace of Egbert Douwes should not be missed afterwards. The museum comprises a total of ten monumental buildings, including Keverling's gift Metaalwarenfabriek. They are connected by a beautiful garden and together they form the oldest industrial area of Joure. In addition to the history of D.E., Museum Joure is home to a wealth of crafts.

Want to experience the museum of Joure with an audio guide? Here's the audio tour.

Also worth a visit: the various windmills in Joure, the Water tower and the medieval church tower of the former mother village Westermeer. Go for a walk in the centre and see the historic buildings on the Midstraat. Walk into one of the many alleys. A whole life used to take place in Kruissteeg, Simonssteeg, Geelgieterssteeg, Roskamsteeg and their kind on the Midstraat. 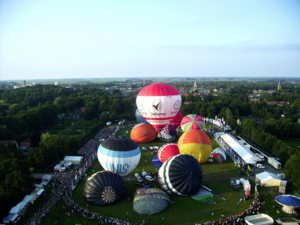 Activities in Joure - Calendar of events

Throughout the year there are several events on the agenda in Joure, culminating in the Frisian Balloon Festivities.

One of the most famous activities in Joure are The Balloon Festivities. These are usually held in the last week of July. Every day of this event dozens of hot air balloons take off. In addition, there is a fairground, fun activities for children, historical attractions, markets and performances by artists. Check balloonfeesten.nl for entrance and the agenda. 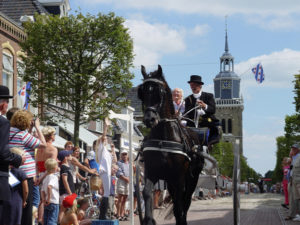 On the first day of the balloon festivities is the Boerebruiloft, a wedding in old Frisian tradition. In addition, there is a horse competition on unseated horses and a large ring ride. This is a parade with beautiful Frisian horses, stretched out in front of a traditional wagon, through the Midstraat van Joure. 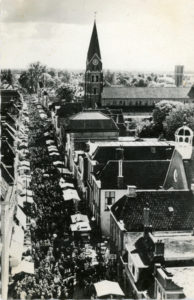 The Joure Fair has been held for over 500 years. This makes the Jouster Merke a unique event! Besides a market with many stalls, there is also a fair ('merke' in Frisian also means fair). Another part of the fair is the horse market. The Jouster Merke will be held on the fourth Thursday of September.

Bad weather? Or just want to go for a nice swim? Not far from the center is subtropical swimming pool Swimfun. There you can enjoy the wild water rapids, rapids, cold water well, sauna, and much more.

Joure is part of several cycling routes in Friesland. For example, the beautiful cycle route 'Op de koffie in Joure' goes through the centre of Joure and surrounding villages. On this route, of about 50 kilometres, there are cycle junctions to show you the way. Along the way you'll see several mills and you can have a coffee at Museum Joure.

More information about Joure can be found at VVV Joure. The tourist office is located in the museum. 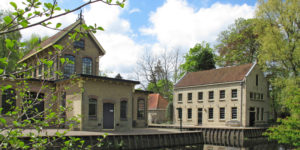 Museum Joure should not be missed during a day in Joure.