"As the clock ticks in Joure, it ticks nowhere

Joure is home to the Frisian clock industry. In its heyday, thousands of Frisian clocks were made and you can still find real Frisian clockmakers in Joure. So too in Museum Joure. There you will find not only an authentic clock factory and clock shop, but also the world's largest collection of Frisian clocks!

Come to the authentic clock factory in Museum Joure and see the largest Frisian clock collection in the world!

In the 18th century the clock industry grew enormously in Friesland. This continued in the 19th century, with 4000 Frisian bells being made per year in Joure alone around 1857. Joure was at that time an important production centre for Frisian clocks. The best-known bells are the Frisian Chair Clock and Frisian Tail Clock.

"A clock often hung in the hallway so everyone could hear it.

Dutch farmers and citizens often had the Frisian tail clock hanging in the corridor so that everyone could hear the clock. But the clocks were also popular abroad. For example, they were exported to North Africa and Indonesia. After the peak in 1857 things went downhill with the Frisian clock industry. This was mainly due to the rise of the German clock. Yet Joure would never come without a Frisian clockmaker. 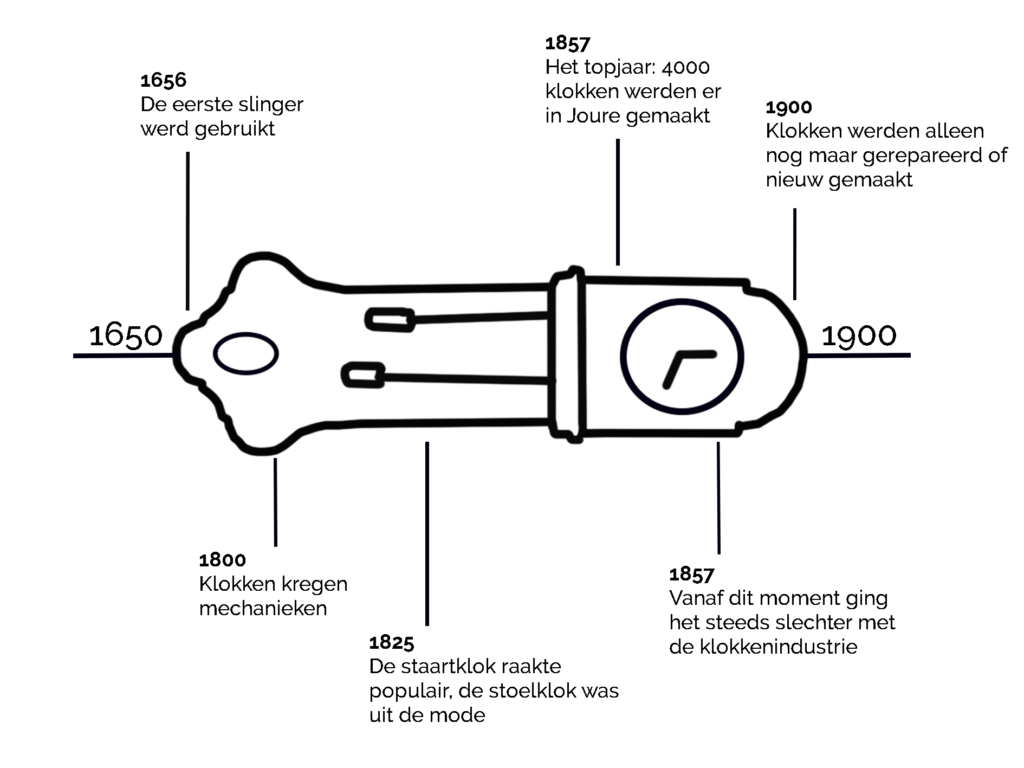 The Aleva and Bouma families were well-known clockmakers in Joure. Wiebe Luitzens Aleva was the most famous clockmaker. His family business grew under his leadership. In the peak year of 1857, the Aleva firm produced no less than 1500 clocks. In 1915 his son Wiebe Folkerts Aleva, who had taken over the company, left for Bussum. In 1962 the workshop was sold to the Dutch Open Air Museum in Arnhem. 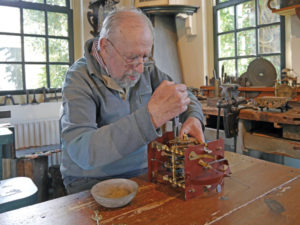 Clockmaker at work in the workshop of the Bouma family, now Museum Joure.

Also a famous clockmaker was Engele Klazes Bouma. His descendants and later servant Sybolt van der Werf continued the clock making business of the Bouma family. When Van der Werf died in 1927, there was no successor. But fortunately the inventory of the workshop was spared. For a long time it was housed in the depot of the Fries Museum. Part of it was unfortunately lost during the Second World War. The remaining part has had a nice spot in Museum Joure since 1986, where the lost part has been supplemented with replicas.

The Italian physicist Galileo Galilei laid the foundation for the pendulum, but it was the Dutch scholar Christiaan Huygens who successfully connected the pendulum to a clock in 1656. The pendulum clock was born. The pendulum ensured that the clock was only a few minutes ahead or behind. The Frisian clocks were also going to use it.

Did you know that a short pendulum goes back and forth faster than a long one?

The Frisian chair clock owes its name to the four-legged table on which the clock is attached. A pendulum is attached to the Frisian chair clock. This causes the hands to move with small jerks. The pendulum is connected to the movement with a verge escapement. The spindle with its spoons ensures that the force of the weight is passed on to the hand in pieces. This creates the ticking sound that a clock makes. The striking action causes the clock to ring a bell at whole and half hours. Each chair clock has an alarm clock. It uses its own weight and can be set by a small hand on the dial.

A work of art in itself 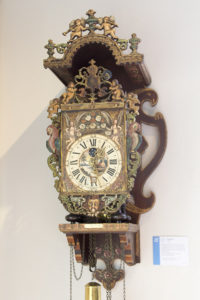 Chair clock with angels incorporated in the casting.

Did you know that every Frisian chair clock has an alarm clock?

In the beginning a landscape was often painted inside the chapter ring and flowers on the lower corners. Above the chapter ring a flower basket was often painted in the middle with a lady or an angel on either side, it seems as if they were presenting the flowers to the viewer. The clock on the right shows all this nicely. Later the ladies were regularly replaced by allegories (symbolic representations) of spring or summer, landscapes and water scenes.

After 1825 the tail clock became popular and the chair clock went out of fashion. The frame and clockwork remained the same. The latter was placed near a tail clock on a shelf and enclosed by an upper cover. In the pendulum case the pendulum is hidden, this is the tail which gave the tailclock its name.

"The pendulum case is the clock's tail 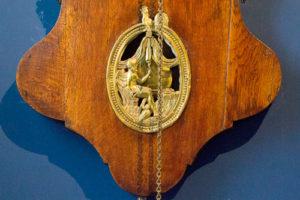 Opening of a pendulum cupboard decorated with brass.

The pendulum is visible through an oval opening in the pendulum box. This is often decorated with a brass window with an image of Father Time or a vase with a Phoenix rising from the ashes. Most tail clocks were made to order, the customer determined the appearance and thus the price of the clock.

A pendulum clock that moves with the times

The iron dial of a tail clock is decorated with various motifs. In front of the paintwork is a glass pane, so it is well protected. The paintings show well the changes in time. In the beginning the painting resembled that of the chairclock. Within the chapter ring often a landscape was painted and in the bar two women or angels with a golden background. Later the corners and the middle were also made lighter or white in colour. In the corners you can often see the four seasons, but over time also flowers and horns.

The customer determined the appearance and thus the price of a Frisian clock.

Around 1850 the corners and the middle green were painted. After that the paintings gave way to pressed brass, often depicting the seasons. Also the chapter ring often got a pressed brass rim, this was called a bridal wreath. At a certain point even whole dials were pressed out of lime copper. As a result, the process of making Frisian clocks began to acquire more and more characteristics of mass production.

A true spectacle on the dial

Around 1800 the clocks started to get special mechanisms. Mechanics are moving representations driven by the movement. There are clocks with rotating sails or nodding heads, but also with balloon rides and riding carriages. These performances all take place on the dial. Sometimes a clock is given a moon and date indication. The moon disk changed position at the top of the dial and the date can be seen on the inside of the dial. 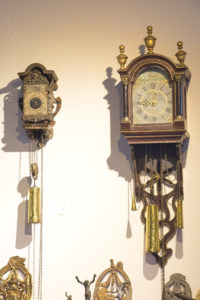 Seater for on board

A variant of the chair clock is the chair skipper. On board of a ship no large stoolclock would fit. The barge has been specially adapted and made a lot smaller so that it would fit on board. The pendulum of the barge is a lot shorter than the pendulum of the stoolclock. Because of this, the clock has a fast ticking sound. The reason for this is that a normal pendulum clock does not work on the water.

The tail bell was also given a variant for on board, the tail skipper. These clocks were popular and people hung them in the house. The timepiece is the same as that of the chair skipper. The dial and the wooden cap is a miniature version of the original tailclock. Only the bottom is different. The pendulum no longer hangs in a case but a carved wall board has been replaced. 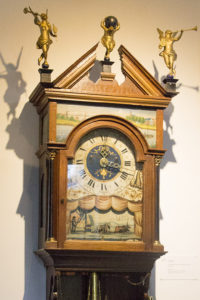 More variants of the tail clock have been made. There are tail clocks with a double cap. This tailclock has a hood with a superstructure. The construction usually ends horizontally. The top cover is decorated with painted diamonds on the front and side. The opening of the pendulum case is often decorated with a round and black lacquered frame without casting. Another variation is the tail clock with a wide mahogany case. This has no brass decoration for the pendulum hole but a wooden frame with a sandblasted glass pane. 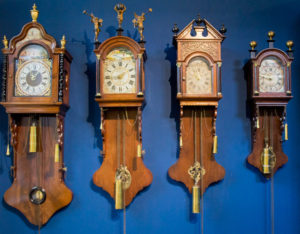 The last variation on the tail clock is the short-tail. This is the forerunner of the tailclock and has a shorter tail. The short-tail is available in two variants. Namely the tadpole, this one has wide cheeks, and the spider head.

In Museum Joure you can experience the glory days of this typical Frisian/Jouster craft. There is an authentic clock workshop where dials are painted and clocks are made. Upon entering you can already hear the clocks ticking. On the walls hang beautiful clocks. A short film takes you back to the time when the Jouster clock industry reigned supreme.

Largest collection of Frisian clocks in the world

Another treat awaits the true enthusiast: in museum building 'It Sael' you can admire the largest collection of Frisian clocks in the world. Each clock has its own special characteristics. Pay special attention to the scenes and mechanisms depicted; sometimes they are romantically sweet but sometimes horribly cruel! 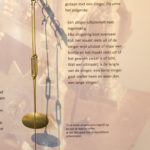 Explanation in the museum about the pendulum. 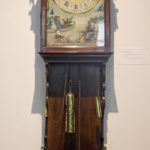 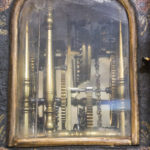 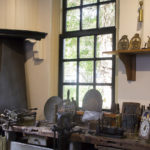 The current workshop of the Bouma family in Museum Joure. 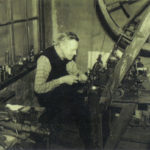 The old workshop of the Bouma family. 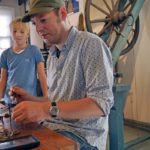 The clockmaker at work in Museum Joure. 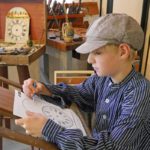 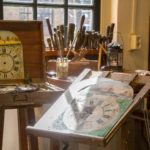 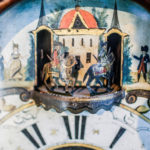