Damask from the Jouster closet unraveled 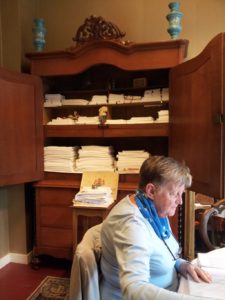 ash from the Jouster case unraveled

After almost 10 years it is now the very last time in Museum Joure that the damask comes out of the Jouster closet. Carefully washed and ironed, the damask tableware is waiting to be unfolded over the table. In May and June 2017, every Tuesday afternoon at 2 p.m. the story about damask will be unravelled by Mrs. Tine Oosterbaan.

The most beautiful damask tablecloths and napkins are woven from linen. Linen comes from the stem fibres of the flax plant. The quality of the flax, the way of spinning, weaving but also the ironing ensures the shine and play of light and dark of this beautiful textile. A clear characteristic of linen damask is that the motifs on one side are 'light' and on the other side of the fabric are 'dark'. Also when only white yarn is used.

Until the beginning of the 20th century, it was the weavers who managed and used the ancient common motifs. Then artists were recruited. Thus, the 19th century floral motifs received a succession of totally different allure. Art nouveau and later art-deco are clearly recognizable in these new designs. Everything is much more stylized and ordered.

For centuries, beautifully woven table linen has been a royal gift. In 2002 our royal couple received table linen at their wedding as a gift with one of Chris Lebeau's existing designs: 'apple'. In the first quarter of the 20th century this artist was a renowned designer for the Van Dissel weaving mill in Eindhoven.

What do you have in the closet?
From her own collection Mrs. Oosterbaan shows and tells about her most beautiful specimens. Visitors can bring their own damask to show. Plugging in at the table in the front saloon in Pand 99 at the Midstraat is free of charge.